We are three enthusiastic young researchers trying to spread into the world our fascination for the strange phenomena of interacting quantum matter. Our second shared feat is a hobbyist’s interest in the Arts of different denominations. This project is about marrying those two and use our limited abilities in the latter form of human culture with our more or less pronounced knowledge of the former. 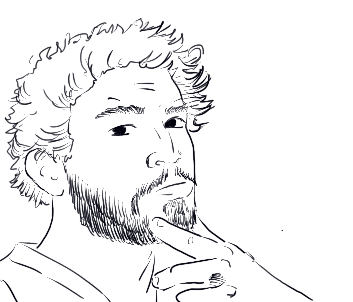 I was born in a country where coffee plantations are beside houses, and sometimes, even in cities. My house was not an exception. This triggered, as you may imagine, a life-long passion for coffee. Physics? Physics came along afterwards, as well as an almost clinical allergy for experimental labs. In my meanderings of life and science, I think daily, and calculate stuff related to the nucleus, how it should behave when smashed at the speed of light, and what can we learn from that. How I arrived at that topic is something I will never understand, and frankly, it is what happens when you had four too many espressi.
I love a good warm beverage, a good book, drawing, and surprisingly, I prefer yogurt from quark.

Oscar’s scientific work is supported by the grant Collaborative Research Center TR-211, which involves many areas of research in several universities, and institutes. The grant is all about understanding the equilibrium and non-equilibrium properties of nuclear matter in extreme conditions, as well as explaining the data found in the experiments (such as HADES, RHIC or ALICE). That means that the members of this collaboration are working to understand and reproduce the physics found at extremely high temperatures found in collisions of nuclei! If you are interested in this collaboration and its findings, click here to visit their main page.

ORCID for Oscar  (The ORCID number is like an academic ID)

Apart from drinking loads of green tea, I spend most of my time pursuing a weird fetish of trying to combine symbols to some sort of sensible equation and putting them into a large computer when I meet some I can’t solve on paper. In the next years, I hope to convey some of the fascinating things which will encounter me on the way to you! In my spare time, I combine my longing for the outdoors with more tea drinking, but also triathlon, drawing, photography, meditation, gardening, cocoa ceremonies, and other life endeavors.

Alex’ work is supported by the International Max Planck Research School for Quantum Science and Technology at the Max Planck Institute for Quantum Optics (MPQ) in Munich.  He works in the research group of Michael Knap at the Technical University of Munich (TUM) focussing on both the theoretical description of complex condensed matter systems and their study in experimental platforms such as single atoms trapped with laser light into arrays reminscent (and in fact very similar!) to the crystal structures forming most solid things around us. The newly formed research cluster “Munich Center for Quantum Science and technology“, of which MPQ and TUM are part of, focusses on both fundamental quantum science and possible ways for applications in quantum devices of the near future.

Being the early bird in the office, I very much enjoy the calm hours in the morning puzzling with equations, thoughts and code. As you might already guess, I really don’t want to be without my coffee that time of the day. Besides that, a daily outdoor activity, preferably running, is almost all I need. Having no talent in drawing, i focus on playing jazz piano.

In her Master thesis at the Synthetic Quantum Systems group in Heidelberg, Beatrice hunted for witnesses of that spooky, still not fully understood, correlation between quantum particles, called entanglement. For her PhD she stayed in theoretical physics but switched to another complex system: the Earth and its climate. One of her everlasting goals is to create overlaps between theoretical approaches and experimental data, little by little accessing the mechanisms of climate variability on different time scales. Here is a link to Beatrice’s institute, group and interesting facts. She acknowledges funding from the Heidelberg Graduate School for Fundamental Physics. Recently, her first book was published: “Mit Quanten rechnen – Quantencomputer für Neugierige” (Springer Spektrum 2020).

First and foremost I like to see myself as decidedly hyperactive to the point of euphoria. I get intensely excited about apparently disparate subjects, math, music, climbing, and anything regarding the sea. I’ll do my best projecting that onto whatever I write, lest it come out indecently dry! Oh also, whenever I run out of cheap jokes I try to do some research in quantum computing.