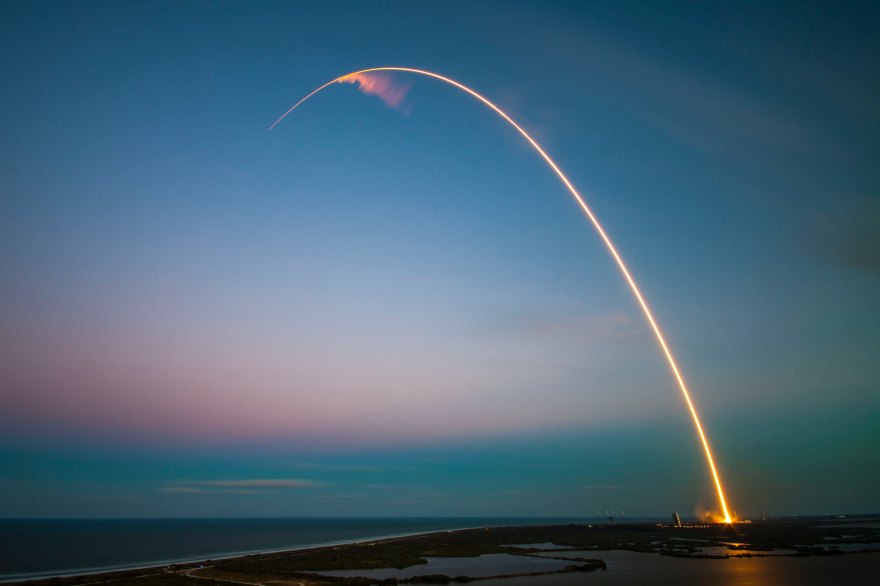 How information can be teleported through the two most counter-intuitive properties of quantum mechanics.

We all know the quantum world is weird, but in no place does it become as weird as in the protocol allowing almost instant transportation of information from one place to the other termed “quantum teleportation”. That may sound like its impossible – but what if I tell you that this can even be done without the recipient of the information knowing? And that this technology is about to make communication absolutely eavesdrop-safe?

Before I can explain to you how teleportation works, I must first explain to you the two principles of quantum mechanics on which it is based upon: quantum superpositions and entanglement.

You may have heard of the widespread explanation of what the different between a bit and a quantum bit (“qubit”) is: a bit can only have the values 0 and 1 whereas a qubit can be anything inbetween. It’s this “inbetween” which is what we call more precisely  a “superposition” of 0 and 1.

There are different ways of interpreting what this means. Some may say that a qubit is in 0 and 1 at the same time, or that in one universe it’s in 0 whereas in the other it is 1. From a more pragmatic point of view however (which was invented by Niels Bohr and his Copenhagen school in the olden days of quantum mechanics) it just means that if we prepare many qubits in the same superposition, then we will measure 0 with a certain probability and 1 in all other cases. Most importantly however, one can prove that a qubit is not in (exactly) 0 or 1 BEFORE the measurement is done. It is for this fact that quantum mechanics is so weird and so many people (including Einstein) could not believe it is actually how nature is.  It was the departure of the Newtonian view of the world as being completely deterministic and predictable . In fact, that view is in practice not even true in classical mechanics, because of dynamical chaos, which we discussed before in these two posts.

If superpositions sounded weird to you, then entanglement will even more. In fact, my quantum information teacher Jonathan Oppenheim  posted a picture of our class on Twitter before he told us about entanglement because “this will change your life forever”. So don’t say I didn’t warn you! (Bell’s theorem is how one can prove that entanglement is indeed as weird as it sounds – we will explain how soon!)

I warned my students that learning Bell’s theorem could be a mentally destabilising experience, but they didn’t listen. Now who will be there to pick up the pieces? pic.twitter.com/Bxnz92YVTE

A quantum superposition has something to do with a single quantum system, for example one electron, which can have its intrinsic magnetic moment (a.k.a. spin) either pointing up or down (or any superposition of the two). This is one example for how you can physically realize a quantum bit (1 being “up”, 0 being “down).

Entanglement is an effect occurring when two such systems interact with each other. Let’s say that the effect of this interaction, which physically can for example be the electrostatic repulsion of two electrons, is that the two electrons are now in a state in which they are in sort of a joint superposition. In it, the electrons either BOTH point in up or BOTH point in the down direction.

Now, what happens if you measure this state? Measuring in quantum mechanics means that the superposition “collapses”, i.e. it takes on one of its possible values. In this case that means that if you measure one electron you immediately know the state of the other, it must also be pointing in the same direction!

Bertlmann is not only one of the pioneers of modern quantum physics but also a reasonably excentric person (which is not very uncommon in this field, see above’s example of Oppenheim.). One of his peculiarities is that he always wears socks of different colour, red and green. Now, you may already guess what this is leading to: If you see one of Bertlmann’s feet and it has a green sock on it you immediately know that the other foot must be in a beautiful red sock, without any quantum entanglement magic!

The real magic of entanglement hides in its applications

One way of seeing entanglement’s magic is its use in quantum communication protocols such as teleportation.

We are finally at the point of introducing teleportation because it is through the example of this quantum communication protocol that you may get a grasp of just how weird entanglement is. We will have to use the two notions of superpositions and entanglement quite frequently in the following, but bear with me, it will be worth the effort!

First, I have to admit that I haven’t told you the full truth about superpositions yet and that has something to do with what measurements we can perform on a single spin/qubit. We can not only measure wheather it is pointing up or down, but we can also measure in which direction it is pointing to. A very useful way to imagine the state of a spin is the so-called Bloch-sphere which you see below

The spin points along one direction of this sphere and we can measure all the different projections along a certain axis. A projection can be visualized by imagining light shining on the sphere from different directions. For example, if the spin is somewhere in the equator plane (such as the state |Ψ1> drawn in the picture), the projection along the z-direction will be zero because there is no “shadow” seen on the z-axis if we shine line in the equator plane into the direction of the sphere.

It is exactly the states in the equator which we called a “superposition of up and down” earlier. But now you see that this is not a unique description – any state in the equator plane will be such a superposition. And moreover, if we were to measure in exactly the spin’s direction, there would be no superposition at all and we could be mistaken and think that we are actually measuring a completely classical state. That would for example be the case for the state |Ψ2> in the picture – it is always in up when we measure along the z-direction.

Now you understand that in order to fully characterize a quantum system it is not enough to just measure one observable, but one needs to measure ones which are different. What this “different” means is understandable on the bloch sphere – the directions in which to measure must be orthogonal to each other, for example the spin projection in z and x direction. The deep reason behind this is that such observables fulfill Heisenberg’s uncertainty principle – they can not be measured to infinite precision at the same time and are therefore “as quantum as it gets”.

…the beginning of every true love story. In this case, Alice and Bob had a fiery summer night in a bohemian cafe on the outskirts of Paris and decide to share an entangled state as a souvenir of their time together and each take a part of it with them.

A few years pass and Alice and Bob don’t really think of each other. But one day, Alice stumbles upon her share of the entangled state and decides that she wants to send a little message to Bob. Luckily, she knows that she can do that without actually knowing where he lives, with teleportation! So she puts her message into a state to be teleported and attaches it to her part of the entangled state.

Then, she follows the quantum teleportation protocol she learnt together with Bob in their quantum information class in which they got to know each other.

Step 1: Alice entangles her share of the entangled state she shares with Bob with the message to be transported 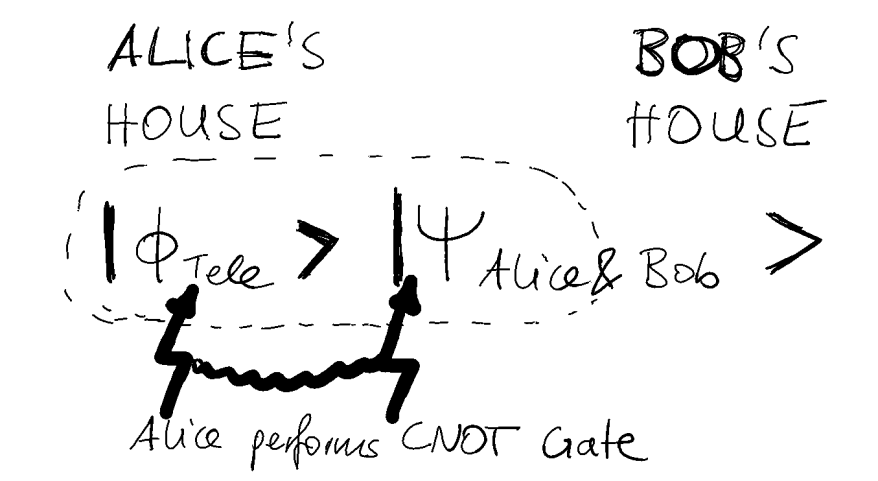 First of all, she performs a joint operation on the state to be teleported and her share of the entangled state at the same time, the technical name of which goes under the name of “CNOT gate”. More important than the name is what it does: It swaps the entangled between Alice and Bob with entanglement between Alice’s portion of the Bob-Alice state and the state to be teleported. Funnily, at the same time the state at Bob’s location becomes very similar to the state to be teleported. In a real experiment, this operation may for example be performed by bringing the two electrons which encode the qubits close to each other so that they feel their electrostatic repulsion. This interaction then leads to entanglement between the two.

Step 2: Alice measures what she has and announces her results

For example, she can simply announce them on the wall of her facebook page – hoping that Bob might read it and remember where he put is share of the entangled state in his house. If he remembers, then he can use the the result of Alice’s measurement to recover the state she wanted to send him by performing the last step of the protocol.

Step 3: Bob performs operations on his state depending on the measurement outcomes of Alice

These operations are simple rotations on the Bloch sphere, so-called “single qubit gates”. By using them he fully recovers the state Alice wanted to send to him – without any physical object having been transported between the two – just classical information! In fact, Alice did not even know what Bob’s address is, she just had to broadcast her measurement results and hope that Bob listens.

Does this mean one can transport information faster than the speed of light?

No it doesn’t! Even by using entanglement information can only be transported with at most the speed of light. In this case the reason for that is that the state of Bob is completely useless and does not contain any information if he does not know the measurement outcome of Alice – which has to be transported via classical communication with light signals. You might ask why Bob’s state is so useless – this has something to do with what I explained earlier about the fact that you need to measure in different bases to know everything about a quantum state. Before he can be sure that he has the correct state he needs to use Alice’s result to perform rotations on the Bloch sphere. For example, it may be that the outcome of Alice’s measurement tells him that his state is now pointing in the x-direction although Alice wanted to send a state in the z-direction, which means he has to do an operation on his state before he gets exactly the right one.

This is all nice and cool – but what does it bring to humanity?

With teleportation, it is possible to send a message to another place without the possibility of anyone to eavesdrop – perfectly secure communication! If you want to learn about how this is possible stay tuned – we will cover quantum cryptography in one of our future posts.

3 thoughts on “Scotty – Quantum beam me up!”

This site uses Akismet to reduce spam. Learn how your comment data is processed.