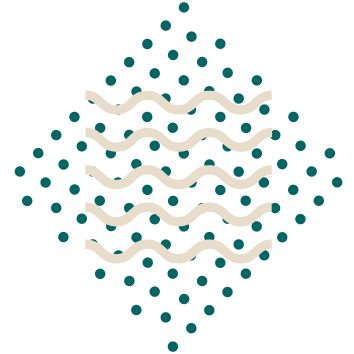 Pictorial Quantum Simulation: Atoms are sitting in a lattice built up by standing light waves, ready to be used for studying the most intriguing questions of state of the art research.

cOOKING UP A qUANTUM sIMULATION

Supercomputers are cornerstones of modern industry. They help to design complicated objects like aircraft, provide the handling of big data sets in AI, trade shares at stock exchanges and set the standards for today’s encryption. However, there exist highly complex problems involving the smallest building blocks of our world which cannot be solved on these supercomputers yet. One example of such a problem is understanding how the known building blocks of matter, atoms and molecules, interact with each other on a larger scale. Unraveling, for example, the biological properties of today’s drugs and how they emerge from its constituent molecules would possibly lead to important breakthroughs in medicine. Quantum simulation, or in other words the idea to use one quantum systems in order to study another one, is a comparatively new method with the potential to solve these problems emerging from the strange and unintuitive laws of quantum physics. Because of its computational power, outperforming even the strongest existing supercomputers, quantum simulation will enable the development of new tools on the forefront of research. For example, those connected with high temperature superconductivity, a property found in some materials transporting energy without loss, would have important implications for tackling climate change.

Classical vs. Quantum Simulation. Controlled quantum systems might find a remedy where supercomputers fail. Photos by Markus Spiske at unsplash.com and Apoorva Hedge [1].

Since quantum mechanics was introduced by Niels Bohr and his famous model of the atom in 1913, physicists use it to describe almost all basic constituents of matter that surrounds us. Atoms, molecules, light, electricity and magnetism, for example, are usually depicted in the language of quantum mechanics. Many of today’s most relevant questions in physics are associated with quantum phenomena related to the interactions between many of such basic constituents. For example: “Why do specific materials behave as superconductors (conducting electricity without loss) at room temperature and others not?” is still an open question. However, quantum problems feature a highly complex mathematical descriptionwhich often remains unsolved due to today’s limited computing power. For example, calculating the properties of atoms just slightly more complicated than the simple hydrogen atom (consisting out of a proton and an electron) becomes already impossible to do without approximations.

Here, quantum simulation comes into play. It is based on a fairly old idea, already introduced by Nobel laureate Richard Feynman in 1986. As indicated by its name, it describes the simulation of intricate quantum problems with other controllable quantum systems. By imitating the real quantum systems, the latter gives access to the initially intractable problem. Or to put it in other words: Troublesome calculations can “simply” be circumvented by running an experiment, which is then called quantum simulator and provides a description of the system of interest.

But what kind of questions can be posed to a quantum simulator? And even more important how it is done? Let’s cook up something and see how far we can get!

Roughly speaking, there are two classes of highly complex quantum problems: Those which can’t be computed due to a lack of computational capacity and those which are experimentally inaccessible. Some problems even belong to both classes but researchers are hoping that quantum simulators find a remedy. Examples of research questions proposed for quantum simulation are: Why do specific materials act like a magnet and others not? What’s the minimal energy effort required for a chemical reaction to happen? How did the early universe form? How does the surface of a black hole look like? [2]

The inner, orange cloud of ultra cold atoms is an ideal system to study a broad range of quantum phenomena such as entanglement, superfluidity and spin dynamics. Photo by Apoorva Hedge.

Must have: The basic ingredients of A quantum simulation recipe

After having found an interesting research question, a mathematical representation of the problem is required. This is usually done by setting up the Hamiltonian, which is a formula containing all the relevant information about the physical system. One illustrative example of a quantum many-body Hamiltonian is the Helium atom, which is fundamental to the understanding of molecules and their quantum features. Helium has only two electrons on his atomic shell and a nucleus with two protons and two neutrons. In principle, the Hamiltonian consists of its characteristic energies. On the one hand, there is the kinetic energy Kin(ei) for the two moving electrons and, on the other hand, there is their individual binding to the nucleus, leading to the interaction energies Int(ei,n) – which is simply given by their electric attraction due to the nuclei’s positive and the electron’s negative charge.

The kinetic energy depends on the individual momenta of the two electrons whereby the interaction energies is determined by the distances with respect to the nucleus and each other.

The additional, red term is called Coulomb interaction and involves pairs of electrons. Naively, these are not more complicated to calculate than the first two interaction terms, just two negative charges repelling each other. However, because of their quantum mechanical identity, the electrons behave like waves and overlap and this is where the magic happens. Against all intuition, the two particles can be in a single place at the same time, but only if they are not identical. Hence, how strongly they interact depends on the state the electrons are in. Additionally, they can be entangled, which is an extraordinary and fancy property of quantum particles, described in greater detail in this previous blog post. As in numerous quantum many-body systems, the mingling and tangling between the quantum particles (here electrons) is the specific detail making the problem too hard to solve classically, even on high-performance computers.

One possibility to experimentally implemented - in a very simplified way - a controlled quantum system is to shine laser light on quantum particles. Photo by Apoorva Hedge.

If the Hamiltonian and the initial state of the system is known, a formalisms in quantum mechanics including Schrödinger’s famous equation describes how the system evolves in time. For most quantum many-body systems, those equation can’t be tackled with today’s supercomputers. This is because the fundamental (unintuitive and strange) laws of quantum physics are involved. Nevertheless, quantum simulations suggest a different way of computation and to do so, one last major ingredient is required: a controllable quantum system.

A controllable quantum system is an experiment consisting of quantum particles, which can be manipulated and measured in a controlled way. Famous examples are superconducting QuBits, trapped ions, photons or condensed Bose gases (overview) which are not confined to research labs anymore. Microsoft, Google, IBM and start-ups like D-Wave Systems are rising to bring valuable quantum techniques on the market. These systems are used to imprint the Hamiltonian and consequently the characteristics of the investigated system onto the quantum particles. Performing measurements then corresponds to calculating properties which were previously inaccessible.

Let it simmer: Dynamics is happening

Now, we have all the basic ingredients (an interesting research questions and a controlled quantum system described by a formula called Hamiltonian) on the table and can start to cook up the simulation. The actual process of cooking is what a scientist simply calls dynamics: Physical states are transformed until a final, usually equilibrated result comes out. Let’s hope that it’s gonna be tasty!

Having a closer look on how the dynamics exactly looks like in a quantum simulation, there exist two typical pathways to time evolve a controlled quantum system: Either Variational, or Trotter simulation. This is a bit like the difference between an oven-ready meal and a constantly stirred dish from the pot. In both cases, the properties of the time evolved solution (e.g. a tasty dish) witnesses information about the real system which cannot be measured or computed directly. 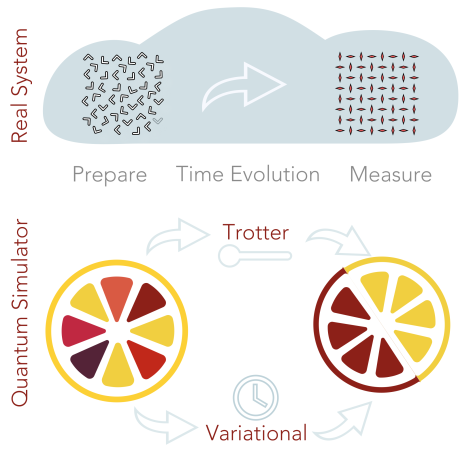 The basic idea of quantum simulation: A system of interest is investigated by mapping it onto another quantum system where time evolution can be performed in a controlled way. In our cooking analogy, Variational simulation corresponds to an oven-ready meal whereby Trotter simulation compares to stirring in a flavorful pot.

Variational quantum simulation performs the same calculation for varying starting configurations until the outcome converges to a conclusive result. Conveying it to cooking, there are dishes which require only a bit of preparation before being put into the oven – time passes by and voilá! – it’s ready. All the magic has happened inside the oven. If it’s not tasty, you might change something when preparing it for the next time until you get what you want. Similarly, the black box of a variational quantum simulator is working. It finds a solution by varying the initial conditions but the process doesn’t allow for interventions. That’s why it is especially suited for studying equilibrium physics as well as ground state properties.

The trotter simulation then corresponds to the more diligent cooks among us. After having put everything in a large pot, you might start with heating and stirring briefly, which is followed up by seasoning and refining. In between, you can’t resist to nibble. That’s how a good chef figures out the perfect timing to stop simmering and serve the dish. Accordingly, the trotter quantum simulation performs calculations with a straightforward sequence of operations. This step-by-step approach incorporates characteristic time intervals, making it capable of tracing the dynamics in the system and to investigate real-time dynamics. On the contrary, it requires additional knowledge about the system and interferes much more with it. To conclude, depending on the task, either trotter or variational quantum simulation is the method of choice. And always remember, pizza might be best eaten warm or cold, it just had to be in the oven once!

Result are ready! How to interpret pleasant flavours and bitter aftertastes?

Let’s assume that we’ve cooked up our quantum simulation result by either one of these techniques. Do you remember the time as a child when you were rejecting food just because you were not aware of the beautiful landscape of different tastes? Throughout life, we keep on exploring new flavours and this learning experience helps us to interpret unfamiliar dishes.

Similarly, it still remains a mystery how to extract the relevant information from a quantum simulation. Since the main motiviation was to overcome classical computers, this bars the way to compare it to other computational methods. The phenomena that quantum simulators outperform classical computers is called quantum advantage. It literally means that there’s no check for the results of a quantum simulation with any other technique. If there’s no check, the results are just hypothesis and one of the main challenges of the field is to deal with them.

But good cooks don’t just fall from the sky! Since the so-called quantum advantage is not reached yet, many benchmark experiments can still be verified by classical results, underlining the hopes for quantum simulation. And the field of research is progressing very fast. “How much do we trust quantum simulators?” is therefore one of the most interesting and challenging questions of state-of-the art quantum physics. An answer to this question will certainly influence the development of quantum devices as well as the way of future research in physics. Stay tuned!

[2] Especially the latter questions are closely related to lattice gauge theories and the interested reader might find a nice review by U.-J. Wiese here: https://arxiv.org/pdf/1305.1602.pdf

One thought on “Quantum Simulation Cookbook”

This site uses Akismet to reduce spam. Learn how your comment data is processed.